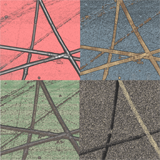 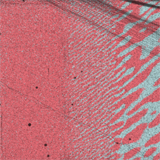 Atomic force microscopy (AFM) is a powerful tool for surface imaging and examination of a material’s local properties with nanometer-level spatial resolution. Since an AFMs working principle is based on the direct interaction between sharp tip and sample, a variety of unique AFM measurement techniques have been developed: quantitative nanomechanical measurements, conductivity mapping, local electromagnetic studies etc. One of these AFM techniques is Piezoresponse Force Microscopy (PFM) – where we explore the electromechanical performance of ferroelectric and piezoelectric materials in terms of their domain morphology with nanometer spatial resolution in different environments and various temperatures.

The working principle of PFM is based on contact mode AFM – a sample scanning technique where the tip is in constant contact with the sample surface with a feedback-controlled positive force value. During the scanning process, an AC voltage is applied between the conductive tip and sample causing out-of-plane and in-plane oscillations of the sample according to the domain structure. This allows us to study domain geometry, dynamics, local piezoelectric coefficients and polarization direction with a spatial resolution of tens of nanometer that is limited by the AFM tip radius. Since the first development this technique by Guthner and Dransfeld in 1991 [1], PFM has become a widely used technique for ferro- and piezoelectric crystals research. A variety of crystalline materials, whose structure lacks a central symmetry, were explored in terms of piezoelectric domain structure and dynamics [1-4]: lead zirconate titanate, triglycine sulfate, BiFeO3 etc. Any material with noncentrosymmetric structure is capable demonstrating piezoelectric properties. From this point of view, the most interesting area for investigation of electromechanical coupling in life sciences would be the case where majority of proteins, polysaccharides and organelles have noncentrosymmetric nature [5]. Piezoelectricity in biological objects was discovered by Fukada in 1950s in wood and later in 1960s in bone tissue [6-9].

This effect, which arises from the electromechanical coupling, was named biopiezoelectricity. Biopiezoelectricity has subsequently been observed in certain types of muscular movement, the nervous system, ion transportation, amino acids etc. [10-16] and, as a result, its detection has become important to nanomedicine and biomedical applications. However, this requires a new method for investigating of electromechanical coupling in life systems. PFM is great candidate for this purpose since it allows piezoresponse measurement with nanometer-level resolution. However, PFM being a contact mode technique, it is unsuitable for studying biological samples. The lateral tip-sample interaction arising from the constant contact of AFM tip with the surface can be significant enough to destroy or deform softer and fragile material. NT-MDT Spectrum Instruments introduces a new approach for PFM investigation of such soft and fragile objects by utilizing the reduced lateral tip-sample interaction in HybriD Piezoresponse Force Microscopy mode (HD PFM).

In HD mode, the sample or the tip is driven into a vertical oscillation by a Z piezo-element at the frequency well below the resonances of the probe and the piezo-element. As the probe and the sample interact with each other in every cycle the tip goes from non-contact to contact regime and the cantilever deflects in response to the tip-sample interactions to the specified level. This sequence of the events and with an idealized deflection profile of the probe in the single cycle of HD mode is illustrated in Figures 1a-b.

As the probe-sample distance shrinks, the cantilever deflection first stays at the baseline level (point 1 in the deflection profile) and then it might bend down in response to adhesive or capillary forces (point 2).

On approaching the sample futher, repulsive tip-sample forces dominate, the bending of the cantilever reverses upwards until it reaches the set-point level (point 3) chosen for vertical scanning feedback. This is the turnaround Z-position of the cycle. As the sample and the tip start to separate, the probe might experience strong adhesive interactions reflected by a well (point 4) in the deflection, before the probe fully detaches from the sample and the cantilever restores its baseline deflection (point 5). 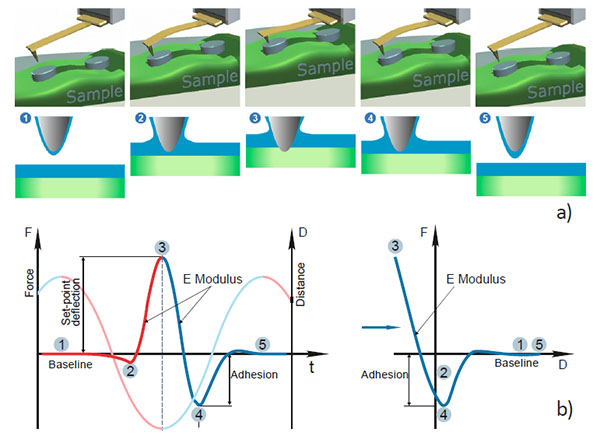 The temporal deflection plot contains a wealth of useful information that can be detected, also mapped during lateral scanning and used for the extraction of quantitative local properties of the sample: the approaching and retracting slopes of the plots in the touching part of the cycle are related to the sample elastic modulus (and can be recalculated to the quantitative local Young’s modulus); the attractive wells on the approach or retracting part of the plot can be employed for measurements of adhesion; the baseline level might be influenced by long-distance electrostatic and magnetic forces that are sensed by probes with conducting or ferromagnetic coatings, respectively.

These are the well-known features of the temporal deflection plots and related deflection-versus-Z (DvZ) curves (Figure 1c), which have been used for a long time in contact mode studies [18, 19]. The DvZ or force curves in contact mode are practically made at the frequencies in the 0.1 – 10 Hz range, which substantially limits their applications.

One of the features of HD mode is ability of “time window” measurements: ability to switch on AC or DC voltage supply, signal recording and processing in the user-defined part of oscillatory cycle. This feature allowed for example to investigate conductivity of carbon nanotubes by allying DC voltage and detecting tip-sample current signal in the “time window” corresponded to the tip-sample contact (range 2-4 on the Figure 1(b)) [20]. 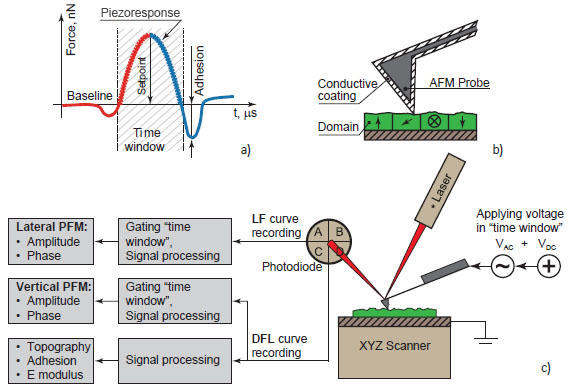 In the user-defined “time window” referred to the tip-sample contact the AC voltage applied between conductive coating of the tip and investigated object.

AC voltage causes mechanical oscillations of the sample depending on its local polarization. Corresponding vertical (DFL siganl) and lateral (LF signal) motion of AFM tip is recorded in defined “time window” and processed to get amplitude and phase signals.

Amplitude of DFL and LF signals characterize local piezoelectric coefficient of the material whereas the phase signals give information about local polarization direction. The full DFL(t) curve of each HybriD mode circle is also processed to calculate adhesion, E modulus and feedback input signals. Thus HD PFM gives complex information about sample’s properties through a single measurement cycle, and at the same time, makes HD PFM nondestructive by retracting the tip from the sample at each HybriD oscillating cycle.

One of the most interesting biomaterials demonstrating piezoelectricity is collagen fibrils – the main building component of bones, teeth, corneal stroma and blood vessels. Collagen is composed of aligned polar protein molecules (fibrils) [21] that form a strong organic crystalline matrix. Piezoelectric properties of single collagen fibrils were recently studied with nanometer-level resolution [22,23]. Despite this advance, the scientific challenge of any piezoresponse study of collagen matrix is still tricky.

The main issue for traditional contact PFM measurements of these structures is complicated by rough surfaces where there is height variation of almost one micrometer. This makes AFM tip to cling to the single fibrils, and vice versa, highly distorting the topography and piezoresponse images.

Due to its working principle, HD PFM mode was found to be a superior technique for studying collagen matrix.

The samples were provided by FibraliSgn Corporation, where a unique technique of depositing animal collagen on glass substrate was developed [24]. 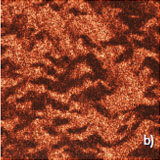 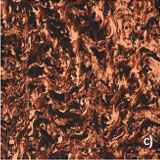 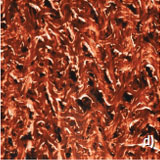 Peptide nanotubes (PNTs) self-assembled from diphenylalanine monomers were recently discovered to exhibit strong piezoelectric properties. Kholkin et al. demonstrated in-plane PFM contrast and high effective d15 piezoelectric coefficient of at least 60 pm/V [25] (for tubes 200 nm in diameter) which is the highest value for known biopiezoelectrics. Together with intrinsic biocompatibility and extremely high Elastic modulus for molecular crystals this makes diphenylalanine PNTs to be very promising materials for developing piezonanodevices that are potentially compatible with human tissue.

PNTs are challenging samples for traditional contact PFM investigation due to their fragility and weak contact with a substrate. So there are no PFM images of non-destroyed tubes can be found in the literature. In contrast HD mode was recently demonstrated to be nondestructive tool for investigation of thin PNTs (around 10 nm in diameter) of another type in terms of obtaining information on topography, adhesion and Young’s modulus [20].

Young’s modulus study of this structures is also of the great interest since previously measured values by different techniques varies from 9 to 32 GPa. Also for the best of our knowledge there is no data with maps of mechanical properties.

All HD PFM studies of diphenylalanine PNTs are published and discussed in Ultramicroscopy journal [27].

Study of temperature dynamics of ferro- and piezoelectric domains is currently of the great interest. Since AFM working principle allows measurements under different temperatures of a sample, PFM is now widely used for this type of study. The biggest drawback of traditional PFM is that topography measurement is based on feedback control of cantilever deflection.

So any change of sample temperature causes parasitic drift of cantilever and as result distorts the obtained image. In contrast, HD PFM working principle allows drift compensation in each scanning point: feedback loop input signal equals not cantilever deflection but difference between maximum cantilever deflection per oscillatory circle and the baseline level.

One of the model samples to study temperature dynamics of ferroelectric properties is triglycine sulfate crystal (TGS). Although TGS primitive cell consist of more than 100 atoms, the nature of spontaneous polarization is very simple.

This sample was used to demonstrate the ability of continuous piezoresponse measurement under variable temperature. TGS chip was fist measured with extremely high for AFM temperature gradient: >0.1 °C/sec. Result in Figure 6 demonstrate domain morphology dynamic when temperature value goes though Curie point. Although parasitic temperature drift of the cantilever was more than 100 nm (Figure 6c), topography and PFM measurements are correct. 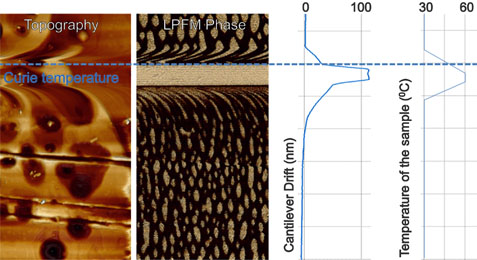 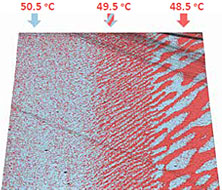 We also demonstrated for the first time the ability of real-time variation of sample temperature while piezoresponse measurements.

HybriD Piezoresponse Force Microscopy opens up new horizons for atomic force microscopy implementation in a field of biopiezoelectrics and other areas of material science where conventional PFM is inapplicable.